Alibaba’s Jack Ma to step down in September 2019

Alibaba’s Jack Ma to step down in September 2019

Jack Ma, the executive chairman of Chinese e-commerce giant Alibaba, has said he plans to step down in a year.

The news, in a letter sent by Mr Ma to Alibaba customers and shareholders, follows conflicting reports over the weekend on the timing of his exit.

Mr Ma, one of China’s richest men, will hand over the reins to Daniel Zhang, currently chief executive.

Alibaba is one of the world’s most valuable companies – its shares nearly doubled in value last year.

Mr Zhang, who is 46, developed the company’s Singles’ Day promotion, which is the world’s biggest one-day online retail event. 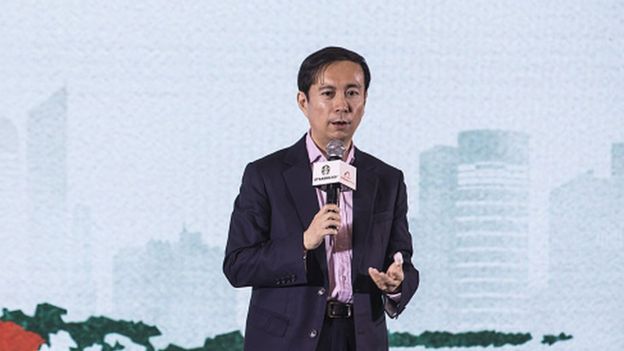 Mr Zhang will become executive chairman on 10 September 2019, the company said in a statement.

The one year handover period is aimed at achieving a “smooth and successful transition”.

Mr Ma, previously an English teacher, co-founded Alibaba in 1999. He has seen it become one of the world’s biggest internet companies.

“Teachers always want their students to exceed them, so the responsible thing to do for me and the company to do is to let younger, more talented people take over in leadership roles,” Mr Ma said in the letter, released on his 54th birthday.

Mr Ma, who has a current net worth of $36.6bn (£28.34bn), will remain a director on Alibaba’s board until its annual shareholder meeting in 2020. He is a permanent member of the Alibaba Partnership.

The charismatic Mr Ma, who is known for dressing like a rock star, said he wanted to return to education.

“The world is big, and I am still young, so I want to try new things,” Mr Ma said, adding he plans to continue in his role as founding partner.

“The one thing I can promise everyone is this: Alibaba was never about Jack Ma, but Jack Ma will forever belong to Alibaba.”

He said Mr Zhang, who has been with Alibaba for 11 years, had demonstrated “superb talent” since taking over as chief executive.

Alibaba listed in New York in 2014 in what was then the world’s biggest initial public offering of shares.

HR has to enable a high performance culture and climate alongside effective policies. Successful talent acquisition and a strong... read more

This 29-Year-Old Thinks Steve Jobs Is Wrong About Design. So He Built a Company to Prove It

If you’ve had a hankering to be a space tourist, you may soon get your chance. Blue Origin, the... read more

Lewis Howes is heading to Facebook. The author, entrepreneur and self-help guru is launching his own talk show on Facebook... read more

Nigeria has produced some of the world’s best authors—so why is its reading culture so poor?

Back in February, Nigeria’s Guaranty Trust Bank announced the launch of The Dusty Manuscript, a contest for Nigerian crime... read more

Finally, Someone Is Helping Make Mass Transit More Predictable. And Cities Love It

This software company is trying to save the environment, improve your commute, and break up traffic jams--and it's just... read more

Engineer Roni Savage, founder of Jomas Associates, based in Uxbridge, London, is celebrating as her business exceeds a £2m... read more